Last week saw the untimely death of the Mauritanian singer Dimi Mint Abba. Aged just fifty-two, she died from a brain haemorrhage whilst on tour Morocco. Reflecting on the life of the much loved star brings to mind an array of fantastic Mauritanian musicians, each of whom brand the republic's powerful and expressive traditional music with their own unqiue stamp.

Mauritania stands with Algeria and western Sahara to the north, to the east lies Mali and down south, Senegal. Wedged between these diverse neighbours, Mauritanian music has often expressed beautifully broody blends of north and west African flavours. From melting bluesy rock to twisted reggae lilts, the approaches are hugely varied.

Traditional Mauritanian music can be played in three 'ways'; the white way (al-bayda), the black way (al-kahla) or the spotted way (l'-gnaydiya). Each way implies a different mood: the black way is often explained as being more masculine and raw, whilst the white is more feminine and refined. A modal system called bhor derived from Arab musical theory is also followed. Below we have profiled three key Mauritanian artists whose music we think is particularly entrancing; three strong females with solid talent to match.To find out more about music from Mauritania and its surrounding areas try exploring The Rough Guide to Desert Blues.

Known as ‘The Diva of the Desert’ Dimi Mint Abba’s popularity was founded upon her powerfully intense live performances. She only recorded a few albums and rarely appeared in Europe yet inspired a huge following across Africa and the Middle East. She was born in to a family of iggawin or griots, whose role it is to act as commentators, satirisers and historians of society. In 1976 aged just sixteen, Dimi began her singing career and appeared on Mauritanian national radio. A year later she was victorious in the Umm Kalthum contest with her iconic song, Sawt Elfan (Art’s Plume). The song tells how the artist’s work is more vital than that of a soldier. On recommendation from Ali Farka Toure, Dimi’s first international album, Moorish Music from Mauritania was released by World Circuit in 1990. Her husband, Khalifa Ould Eide also sings on the album. Soaring and husky vocal lines are accompanied by looping rhythmic riffs. Dimi plays the ardin, a fourteen-string relative of the kora whilst Khalifa plays the tidinit, a four-stringed lute. The tbal, a large kettle drum, is also heard. In 1992 she recorded a second album, Music and Songs of Mauritania for the French record label, Auvidis. In 2006, Dimi Mint Abba made her first UK performance in over a decade at WOMAD. African and Arabic threads are closely woven together to create a beautiful tapestry of sound that explores the cross-over cultures so well. 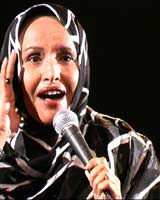 Also born into a griot heritage Malouma started to sing and play the ardin at a young age. Part traditionalist and part renegade, her songs are experimentations in blues, rock and reggae fusion. She is unafraid to disregard and then re-work Moorish musical structures and is renowned for her outspoken stance on taboo subjects. Her lyrics deal with a range of topics such as divorce from a women’s perspective and the fight against AIDS.  In the 1990s her music was banned by the Mauritanian authorities because of her support of reconciliation between the long divided Black and Moorish communities in the country. On the international scene Malouma has often been criticised for her relentless eclecticism. The late Charlie Gillet lambasted the guitarist on her otherwise apparently great 2007 album, Nour. Considering that Malouma had previously recorded the music with her own band, and her producer had added in the embellished guitar line later on, it seems likely that layers of mediation outside Malouma's control were at play here. When Malouma is let loose and really gets into her groove she seeps a coolness and attitude that is magnetic. Aching arched vocals, hard rock guitar lines, Mauritanian percussive drive and an angst-ridden bluesy mood make for a involving sound.

Ooleya is still relatively unknown in the West. Her unbelievable wide vocal range and distinctive ullulating timbre mark her out as another excellent griot musician from Mauritania. Ooleya also plays the ardin and is often accompanied by an ensemble populated by her siblings.